The association has received positive support from successive 77 Sqn commanding officers and also from the 77 Members at large.

77 Squadron Association Committee had grown to believe that Fighter Associations would not survive as independent organizations. Firstly because of not being able to fill Committee positions. Secondly, most fighter personnel are not loyal to one Squadron but loyal to the fighter world as most people have been in multiple squadrons.  Additionally, independent fighter organizations cannot use their numbers effectively to lobby.

All ex fighter community personnel are conscious of the benefits that a strong Fighter Community can have in social events, and mates helping mates. Also that having a political voice is becoming more and more necessary as successive governments examine all forms of government expenditure. It therefore made sense to the 77 Sqn Association Committee that 77 Squadron Association join FSB.

The following outlines the future situation. The Committee of FSB has a position dedicated to a 77 Sqn Chapter which is responsible for the maintenance of:

This way 77 Fighter Squadron’s prominence in history, public enquiries as well as social and commemorative events would remain.

The Association Patron AM J W Newham, AC, a former CAS who flew 71 operation missions with the Squadron in Korea.

The 77 Squadron Association story began on ANZAC Day 1953 in Sydney. The central players were two ex No 77 Squadron bods who had served with the squadron during WW2 - Alywn Quoy and Harry Delaney.

The two had gone to the city to find some war time mates. The purpose of their endeavours is not clear but may have something to do with Mr Tooth or Mr Toohey or both - NOTE: at the time Mr VB was a well kept south of the border secret.

They had no luck finding ex WW2 members of the squadron but came upon a group of hotshots, in uniform, who had just returned from Korea. The group, supervised by an RAAF padre, was preparing to march in the ANZAC Day parade. Alywn asked the padre for permission to march at the rear of the group.

Even after being informed that both Alywn and Harry had served with the squadron in Darwin and New Guinea, the padre refused permission stating - these men (referring to the group he was with) have just returned from the war.

As a result of the padre’s gross insensitivity Alywn and Harry marched by themselves carrying a banner consisting of a stick and a piece of cardboard displaying the words “77 Squadron 1942-45”.

The experience made it clear that to be able to take their rightful place in future ANZAC Day marches in Sydney, there was a need to form an association of people who had served in 77 Squadron during WW2.

To this end Alwyn Quoy contacted a former member of the squadron, Mr Ron Voight, a radio announcer with radio station 2KY.

Ron’s efforts resulted in twenty ex 77 members meeting at Ushers Hotel Bar on a May Saturday morning a few weeks later. Following this initial contact, a formal meeting was held in the private dinning room of the Great Southern Hotel in George Street, Sydney. Over thirty people turned up and the No 77 Squadron Association came into being. This was June 1953.

At the meeting an executive committee was appointed as follows: President, Bill “Nugget” Read - Secretary, Alwyn Quoy - Treasurer, Harry Delany. The people who attended the inaugural meeting each donated 5 shillings to purchase of a banner for use on ANZAC DAY. This original banner, which featured in Sydney ANZAC marches until 1964, is on display in the 77 Squadron Headquarters building at RAAF Williamtown.

In 1964, thanks to a fifty pound donation from Dr Mick Kater and action by Ray Brooker, a second banner was produced. This banner has been superseded and is also now on display alongside the original banner.

When this occurred the 77 Squadron Association remained in being but operated on a reduced basis. One high point during the period was the squadron’s 40th anniversary celebration in 1982.

In March 1992 the association received a new lease of life. This came about as a result of an emotional response when the Freedom of the City of Perth was conferred on the occasion of the squadron’s 50th anniversary. The significance of the event related to the fact that 77 Squadron had formed in Perth during the dark days of WW2 at the height of the Japanese drive towards Australia.

Every year association members march proudly behind their banner in the Sydney ANZAC Day parade as a separate group but as part of the Fighter Squadrons contingent.

In August 2002 No. 77 Squadron Association became Incorporated. Another milestone was reached in 2003 when an affiliation arrangement was concluded with the No. 77 Squadron Association, Royal Air Force (RAF). It is a loose affair mainly associated with exchanging newsletters. Never-the-less it has brought the two associations closer together, and possibly, in the longer term, the respective services themselves.

The Association encourages membership from all ranks past and present. We have over 250 names on our data base.

Over the years the association has received positive support from successive 77 Squadron Commanding Officers . We are pleased to be able to say that the same situation still exists today. 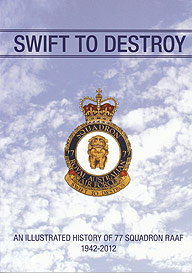 The history of 77 Squadron RAAF, 1942 to 2012, can be found in Swift to Destroy published in 2012 by the 77 Squadron Association to celebrate 70 years of continuous service since the Squadron’s formation on 16 March 1942 in Perth, Western Australia flying Kittyhawks.

The Squadron went onto fly Mustangs, Meteors Sabres, Mirages, Macchi, F/A-18 Hornets and now the F35A Lightning which were supplied in 2021.

Today the Squadron is based at RAAF Base Williamtown, north or Newcastle.

No. 77 (Fighter Interceptor) Squadron was formed at Pearce, Western Australia on 16 March 1942 and equipped with Curtis P-40E Kittyhawks. The Squadron moved to Darwin in July 1942 and engaged the Japanese over northern Australia. November saw the Squadron move to Milne Bay and it remained in the islands until August 1945 before moving to Japan as part of the British Commonwealth Occupation Force, equipped with F-51D Mustangs. 77 Squadron remained in Japan for four years. When North Korean forces invaded South Korea the Squadron moved to Korea During that time they were re-equipped with Meteor aircraft.